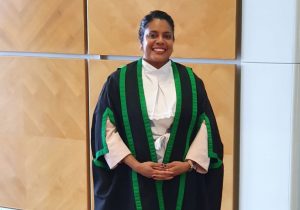 She’s the first female Indigenous Speaker in Australia, and Ngaree Ah Kit is refusing to allow toxicity to define her.
“I don’t believe there’s room for nastiness in politics,” she said.
“That’s my job every day: making sure I’ve got mutual respect and relationships with every member of [Northern Territory] Parliament.”
Installed as Speaker during the first parliamentary sitting days after the Territory election in August, Ah Kit has been in the job for less than a week.
“I didn’t understand the exact level of intricacy with this role and so as a bit of a micromanager, I’ve basically said everything to do with this role I want to know about,” she said.
After the NT’s previous Speaker Kezia Purick resigned amid a corruption scandal with only a few sitting days left before the election, deputy speaker Namatjira MLA Chansey Paech stepped into the role for the interim, with Ah Kit as his deputy.
Though she was deputy Speaker for a very short period of time, the example of her immediate predecessor has helped Ah Kit find her feet.
“Chansey’s been a great mentor. He’s full of knowledge and very polished, so I was able to watch his demeanour in the chair and the way that he was able to maintain calmness in the chamber,” she said.
“I love the fact that he was very impartial in that chair; if you stepped out of line, it was his role as a Speaker to pull you up.
“I took a lot of learning lessons from watching Chansey.”
Ah Kit lost her father just six weeks before the election. Jack Ah Kit was a political trailblazer; the first Indigenous Cabinet Minister in the NT and a tireless campaigner for Aboriginal rights and culture.
She said losing her dad was devastating, especially so close to the election.
“I can’t even describe how tough it was. I’m naturally a resilient person but you only get one dad, and my dad and I were very, very close,” she said.
“We used to talk politics every day, and I always used to pick his brain, because he had ten years in the job.”
Ah Kit said it was only with family support that she was able to get back on the horse.
“It was a very very tough period. We’re a very strong and tight family unit, we have a huge family and extended family and friends; that support was really lovely,” she said.
“I took a lot of strength from everybody else around me to be able to get off the couch … It wasn’t easy.”
One of Ah Kit’s biggest goals is to give other people the same support she had from her parents.
“How do I make sure that families are supported to give their kids the best start-up at life and support them all the way through?” she asked.
“I encourage these kids that if your family has had a certain scenario for all of your life that you don’t inherit it. You can be the one that makes the change. You can be the first to go to university. You can be the first one to buy your own home.
“Sometimes I think that maybe our young people don’t hear that belief of support enough and so in my situation I tried to use my position to instill that belief.”
Mental health has been a passion of Ah Kit’s since she lost her younger brother to suicide in 2007, and she’s pushing for a 24-hour suicide prevention service in her electorate of Karama.
“We need a space that’s operating 24/7, it needs to be a culturally appropriate space run by local Aboriginal people. Because Aboriginal people were 30 per cent of the population up here [and] 50 per cent of the suicide rate,” she said.
“We need a place where people could go to be safe at any hour of the day.”
Ah Kit is in it for the long haul; she knows it will take time to achieve her goals and has a plan to be in office for at least one more term.
“I’ve worked in government since I was 19, I know that change takes time,” she said.
“I sold it to the people during coronavirus; I said, ‘If you put your trust in me, I want to give you three terms. I want to give you 12 years.’
“I work best when I have that plan, so I wanted to influence intergenerational changes. I wanted to encourage people to be a part of the change that they wanted to see.”
By Sarah Smit National Indigenous Times (NIT)