Remembering the 1946 Pilbara strike, Australia’s longest, that paved the way for Indigenous right.

An aboriginal man sitting on old weathered cars during the day at an Aboriginal community. 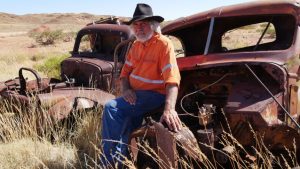 Marshall Smith and what’s left of the cars that carried workers in the landmark 1946 Pilbara strike.(ABC Rural: James Liveris)

The rusting car bodies that Banjima man Marshall Smith sits among at Mingullatharndo community are a daily reminder of one of the most significant human rights struggles for Indigenous people in Australian history.

WARNING: Aboriginal and Torres Strait Islander readers are advised that this article contains images and names of people who have died.

“Some days I look at these trucks and think, how did they do it? “Mr. Smith said.

“They were survivors, and this is the proof.”

What Mr. Smith is referring to is the 1946 Pilbara strike, when 800 Aboriginal pastoral workers walked off stations in a campaign for fair wages and working conditions.

For many years, the workers were denied wages or paid either a low sum or compensated in rations of tea, flour, sugar and tobacco.

It was coupled with harsh working conditions, and Mr. Smith recalls often hearing stories of brutality.

“A cousin of mine who has now passed on, Monty Smith, was 19 years of age when he went across to Mount Brockman Station as a horse breaker,” Mr. Smith said.

“The station manager at the time was a very hard man, an ex-boxer who didn’t take any nonsense, and he would boot the Aboriginal workers in their swags to wake up and sometimes he would go as far as whipping them with a stockwhip.

“One day he kicked cousin Monty and copped a hiding out of it.

“It must have been a fairly serious hiding because my cousin left the Pilbara straight away, walking to Carnarvon where he remained for the rest of his life until he passed on.”

Date with destiny, written on scraps 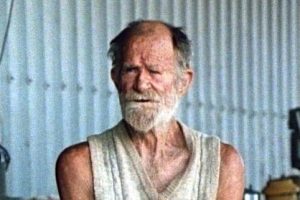 After discussions between Indigenous working groups about their living and working conditions, two Aboriginal lawmen, Dooley Bin Bin and Clancy McKenna, approached a white contractor by the name of Don McLeod, an active unionist, with an idea.

In Western Australia, Aboriginal labour was essential for rural production. At the beginning of the shearing season on May 1, 1946, when workers were needed most, a “walk off” at all stations was planned.

Beth Smith, Marshall’s wife, said that was when word of mouth became crucial.

“I believe Don McLeod made a calendar with the first of May set as the date, and then Dooley Bin Bin and Clancy copied the calendar on whatever they could find — labels, scraps whatever and marked all the days,” she said.

“From there they went to all the stations and said, ‘Every day you mark off one and when it gets to this one, that’s when you leave the station’.”

“The pastoralists were hearing yarns about the strike and they called the Commissioner of Native Affairs and said, ‘You need to do something about it’,” she said.

“His reply was ‘blackfellas are not capable of causing a strike’.”

Refuge was sought at two established camps, the first at Twelve Mile, near Port Hedland, and the other at Moolyella, near Marble Bar.

“The commissioner of native affairs was quoted to say after the strike, ‘I guess we made a bit of a boo-boo there didn’t we?’,” she said.

“It just makes me laugh.” 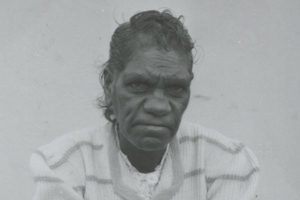 Daisy Bindi led the walk off at Roy Hill Station during the Pilbara strike in 1946.(Supplied: South Australian Museum)

‘We will fill the jails’

As the campaign gained traction with more workers walking off, animosity grew and heavy-handed policing and aggressive behavior from station owners rose because they believed the Aboriginal people owed debts.

Mr. Smith said it was a non-retaliation method that was the undoing of the perpetrators.

“Old Dooley’s strategy was, no we don’t fight, we don’t use physicality, we won’t go into spearing … he said what we do is, we go to jail,” Mr. Smith said.

“We will fill the jails.

“Next minute, 33 blokes were chained and taken to Marble Bar, for instance, and then they would go and double that number.

“And, of course, then the police and government realised it wasn’t working.”

The imprisonment of so many strikers led to the Fremantle branch of the Seamen’s Union of Australia imposing a ban on the shipment of wool from Pilbara stations.

Although the ban did not have a huge impact on the wool industry, the combination with work halting on stations was enough to force the Department of Native Affairs to take less punitive measures and concessions were granted.

Mr. Smith said it was ingenious.

“It was a strategy without aggression, but it was the one that worked,” he said. 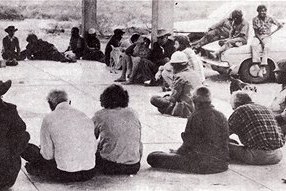 A 1979 school board meeting at Strelley, one of the stations bought by strikers. Their descendants live there still. (Supplied: John and Gwen Bucknall)

After the strike ended in 1949, Aboriginal workers refused to go back to their old roles and instead pooled funds from surface mining at areas across the Pilbara, including the Mingullatharndo community, which Marshall Smith now calls home.

Enough money was eventually made to buy stations, including Warralong, Strelley, and Yandeyarra, where the descendants of strikers live today.

Mr. Smith said it was moving to see what the older generation achieved.

“In those days, I don’t think they thought what was going to come from it, they just knew they had to unite and be one voice,” Mr Smith said.

“I don’t think they had any future thinking or dream about the government changing directions to help. I think they were just living in hope that they could win at the time.”

Monash University history professor Bain Attwood said the strike was one of the most dramatic moments in Australia’s Indigenous history.

“The strike was very significant in advancing the claims of Aboriginal people to Indigenous rights to land and autonomy,” Mr. Attwood said.

“It also played an important role in drawing attention to the rights of Aboriginal people to a fair wage and better working conditions.”