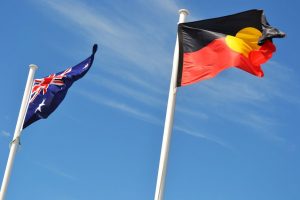 More than 140 years after it was first composed and performed, Advance Australia Fair is again being updated in a move the Prime Minister says reflects a “spirit of unity”.

From January 1, 2021, the second line of Australia’s national anthem will change from, “For we are young and free” to “For we are one and free”.

Governor-General David Hurley has agreed to the Commonwealth’s recommendation to make an amendment to the anthem for the first time since 1984.

Prime Minister Scott Morrison said in a statement that the change was being made for all Australians.

“During the past year we have showed once again the indomitable spirit of Australians and the united effort that has always enabled us to prevail as a nation,” he said.

“It is time to ensure this great unity is reflected more fully in our national anthem.

“Also, while Australia as a modern nation may be relatively young, our country’s story is ancient, as are the stories of the many First Nations peoples whose stewardship we rightly acknowledge and respect.

“In the spirit of unity, it is only right that we ensure our national anthem reflects this truth and shared appreciation.

The NSW Premier previously advocated for changing the lyrics to Advance Australia Fair.

“Changing ‘young and free’ to ‘one and free’ takes nothing away, but I believe it adds much.”

Composer Deborah Cheetham is a Yorta Yorta woman and says the new wording is long overdue.

“It’s an important acknowledgement. The word young has underestimated the lives that have lived on this continent for some millennia,” the soprano and educator said.

“In terms of culture, society, and population, we go back 60,000 years. We’re very definitely not young,” he said.

“We should regard ourselves as a nation that’s bonded, as opposed to being divided, and we should recognise our Indigenous history as part of our Australian history.

“‘One and free’ looks for what brings us together. It’s actually a focal point for that discussion about who we are as a country.

Mr. Hamm said the symbolism behind the action was important for Indigenous Australians.

“Symbolism is important, real action and change is important. If you do one or the other, you only get half the job done.

“You do need symbolic change, you do need real change.

“This is an important indication to ourselves as a country as to what our expectations are going forward, and to recognise in our national anthem the continued human occupation of this continent from 60,000 years plus to 1 January 2021, and beyond, is an important change.”

But Labor Wiradjuri woman Linda Burney, the first Aboriginal woman to be elected to the federal House of Representatives, said more needed to be done.

“It flies in the face, of course, of the Government saying that they want to work with Aboriginal people, but the real issue is a constitutionally enshrined voice,” she said.

Advance Australia Fair was composed by Peter Dodds McCormick and first performed in 1878.

It was adopted as the country’s national anthem on April 19, 1984, replacing God Save the Queen, which had been in place since the time of British settlement. 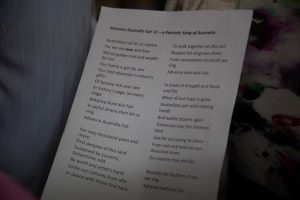 From January 1, 2021 the second line of Australia’s National Anthem will change from “For we are young and free” to “For we are one and free”.(ABC News: Samantha Jonscher)

Prime minister Bob Hawke last recommended a modification of the national anthem to the governor-general in 1984.

The historic change to Advance Australia Fair has involved consultations with state premiers, state governors who have been advised by the Governor-General as well as the Speaker of Federal Parliament and the President of the Senate.

In recent times, leaders from all sides of politics have expressed public support for changing the anthem to better reflect modern Australia and its Indigenous heritage.

Australians all let us rejoice,

For we are one and free;

Our home is girt by sea;

Our land abounds in nature’s gifts Of beauty rich and rare;

Beneath our radiant Southern Cross We’ll toil with hearts and hands;

To make this Commonwealth of ours Renowned of all the lands;

For those who’ve come across the seas We’ve boundless plains to share;

With courage let us all combine To Advance Australia Fair.