Cricket Australia has been told the game is seen as a “white privileged sport”, as the governing body wrestles with how to recognise the Black Lives Matter movement.
The comments were made by a young Indigenous activist, Tamika Sadler, in the latest episode of CA’s panel series, Cricket Connecting Country, discussing systemic racism in Australian society and historic injustices in the sport. 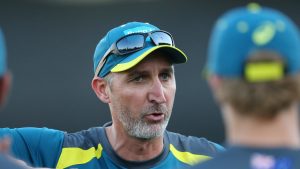 Jason Gillespie is a guest on the latest episode of Cricket Australia’s “Cricket Connecting Country” series discussing racism in the game. Credit:Getty Images
In comments which could also raise debate over how the game marks Australia Day, Sadler also urged those sympathetic to the BLM cause not to celebrate the national day.
Days after rugby great Nick Farr-Jones warned the Wallabies not to take a knee, Sydney Thunder, Hobart Hurricanes and Adelaide Strikers players performed the gesture in the WBBL.
The national women’s team and New Zealand last month formed a Barefoot Circle, a rite started last season, in recognition of the inequality between black and white Australia.
There will be many in the cricket world paying close attention to how the Australian men’s team addresses the issue when their international season is slated to start next month.

Australian cricket
‘Lame’: Holding hits out at Australia for not taking the knee
The side was slammed by West Indies great Michael Holding for not taking a knee during the tour of England in August and September. Coach Justin Langer later conceded the team had erred in its treatment of the issue.
Hosted by CA board member Mel Jones, the latest instalment of CA’s panel show features the first Indigenous man to play Test cricket for Australia Jason Gillespie, former Pakistan-born English cricketer Azeem Rafiq and Indigenous activists Sadler and Benjamin Thomson.
In a discussion about the 2007/08 racial furore widely known as the “Monkeygate Scandal” in which Australia’s Andrew Symonds was allegedly called a “monkey” by India spinner Harbhajan Singh, Sadler was asked by Jones if she saw cricket as an “inclusive” sport.
“That’s a really good question, I guess no,” Sadler said. “Even reflecting on that situation as well and seeing the image of Symmo. I was only a young girl but that was only the person other than other teams internationally that was the only person of colour I would see in an Australian side.
“As a young person growing up in Australia, we’re supposed to be so multicultural and multifaceted, why is there very few people of coloured faces that are playing the sport?
“Predominantly, it is a very white privileged sport as well, like white society sport. At the end of the day as well, when these situations happen it can’t be just a situation and nobody is learning from that
Tammy Beaumont of the Thunder takes a knee prior to the Women’s Big Bash League WBBL match between the Melbourne Stars and the Sydney Thunder at North Sydney Oval, on October 26, 2020, in Sydney, Australia. 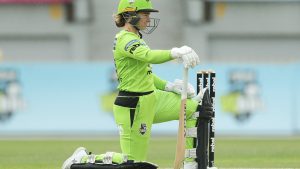 Credit: Getty Images
“We can’t keep having case study after case study, there has to be action taken. At the end of the day as well, it’s up to clubs to take that initiative as well.”
Sadler, who along with her partner Benjamin Thomson organised a peaceful BLM rally on the Sunshine Coast in June, said supporters of the movement should join her on ‘Invasion Day’, a term First Nations People use for Australia’s national day.
“You can’t celebrate Australia Day and then attend a Black Lives Matter rally. There is a line in between and you have to choose and really understand and educate yourselves on these issues that are happening in Australia since colonisation and the genocide that has happened and continues to happen to Aboriginal and Torres Strait Island people.”

Big Bash
Thunder confirm they will take a knee during WBBL, Sydney derby washed out Australia’s highest profile player of colour Usman Khawaja, who was born in Pakistan, said the game in this country has “still got a long way to go” regarding diversity.
He is part of a working group recently formed by CA to create an action plan to bring greater cultural diversity and inclusion within the organisation and the sport. Khawaja has said perceptions that he is a “lazy” cricketer were due to his ethnicity.
English cricket has been rocked by claims of “institutionalised racism” made by Rafiq against his club Yorkshire. Rafiq says his experiences at Yorkshire drove him to the brink of suicide. Yorkshire have opened an investigation.
The Pakistan-born player choked back tears as he detailed his disillusionment with the sport to the CA panel show.
“I love the game of cricket, I’m not sure I want my son to go anywhere near a cricket ground,” Rafiq said.
“That is really, really upsetting for me. As Dizzy [Gillespie] knows I love the game but I haven’t got him a bat or a ball yet and that really, really upsets me.”
Gillespie, who coached Rafiq for part of his career at Yorkshire, said he was unaware of the player’s “heartbreaking” experiences at the club until a recent interview Rafiq had given on Sky in the UK.
The first Indigenous man to play Test cricket for Australia, Gillespie urged people to listen to those who experience racism.
“We have two ears, one mouth, use them in proportion,” Gillespie said.
By Andrew Wu
The Sydney Morning Herald October 27, 2020