Kevin “Cookie” Cook, a Wandandian and Yuin man, was born in Wollongong in September, 1939. After work in the steel mills, he headed to Sydney to work on the new high-rise city buildings. Cookie became a dogman, the dangerous job riding the loads up the towers. This was a dramatic time in the industry: the Builders Labourers’ Federation had shifted to leadership by workers from the job sites, making uncompromising demands for safety and developing green bans to protect residents and the environment.

Cook brought his knowledge of Aboriginal and migrant communities together with these new BLF methods when he became the organiser for Aboriginal BLs on the Redfern Housing Company, and worked with the National Black Theatre in Redfern, before becoming involved in Tranby Aboriginal Adult Education Cooperative College in 1975. He believed cooperatives were useful for Aboriginal communities, but went further.

Cook had seen for himself in Wollongong how the education system was failing Aboriginal kids. With Tranby support, he spent six months at Coady Cooperative Institute in Canada, meeting activists from Africa and around the world, building international networks. He returned to become General Secretary of Tranby and built it into a centre for adult learning and cultural revival. Young Aboriginal men and women travelled from across the country to undertake courses in basic literacy, community studies, business training and preparation for tertiary education.

Cook used his many contacts and his enthusiasm to draw in young activists. One was Brian Doolan, a teacher working in the Wilcannia community who became Tranby’s first Director of Studies. There were Indigenous educators like Terry Widders and Lynette Riley, unionists and academics. At first it was mostly unpaid until, after lots of submission writing, support flowed from the new Federal Aboriginal Education structures.

Cook was taking an active role in NSW political life, becoming involved in the Labor Party’s Aboriginal Affairs Policy Committee, with Bob Bellear, Rod Pickette and Meredith Burgmann. At the same time, Kevin was building his Trade Union networks, setting up the Trade Union Committee on Aboriginal Rights (TUCAR) at Tranby to strengthen communication between unions and Indigenous organisations.

But Cook’s priority was education in the community. Despite struggling with funding, Tranby started courses in communities – with many in the bush. The funding mainstays were unions like the MUA, individual donations and the backing of the Australian Council of Churches. Linked with the courses running at the college and those in communities, he built links with campaigners on issues such as Aboriginal Deaths in Custody and the Stolen Generations.

At the same time, Kevin developed Tranby as a base for bush people involved in the struggle for Land Rights in NSW. From 1979 to 1983, Kevin was chair of the first NSW Aboriginal Land Council, a community organisation which led campaigning for land rights. He travelled from one end of the state to another, getting to know and listen to communities and to bring their concerns to centre stage. The final NSW Bill in 1983 was a frustrating mix which recognised some rights but took away others. After much consultation, Cook decided to work with the new Land Rights Act as Chairperson of the Interim Land Council, set up to organise the policy’s structures. He insisted that community voices should be heard, and encouraged many different strategies to achieve land rights – some within the Act like land claims and others outside it altogether, such as heritage protection.

Through this time, Tranby offered support for communities struggling with the new policy’s demands by running new courses in rural areas to build skills in accounting, legal and management skills. National Land Rights laws were promised in the early 1980s and a unified national Aboriginal response was needed.

Pat Dodson has said of Kevin that he “opened the pathways” by which leaders from all states could feel safe and confident in their new relationships with those from other states. Cook built those national relationships which brought the Federation of Land Councils into being. This network built the foundation for the push into the international arena. In the mid 1980s, Cook and Aboriginal unionists used their ACTU standing to take the arguments for Indigenous rights into the International Labour Organisation, then revising Convention 107 on Indigenous people. As unionists, they demanded the ILO listen to Indigenous people in any vote on Indigenous labour conditions. Their arguments won: the ILO meetings were henceforth opened to hear Indigenous people speak on Convention 107. 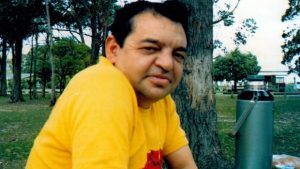 His view was that these were issues of social justice.

“We needed to take it out of this narrow focus of ‘these are issues for Aboriginal people and Aboriginal people need to be the ones that fight it’. These issues do restrict and oppress indigenous peoples. But we needed to involve a much larger portion of the community to achieve what needed to be achieved, because it was a thing for all of us. It wasn’t just a thing for black fellas. It was for all Australians.”

In the later 1980s, despite his worsening emphysema, Cook continued to nurture the innovative role of Tranby in education, national and international politics. As a national hub, Kevin enabled Tranby to be the base for the long march Bicentenary Celebrations in 1988. Over this same time, his support for international movements was extensive, building on the links he had made at Coady Institute, Tranby had visits from Hilda Lini and Barak Sope from Vanuatu; Herbert Chitepo, the Zimbabwean leader; Oliver Tambo, Nelson Mandela’s ANC comrade; and from Archbishop Desmond Tutu.

In the last years of his life, bed-bound and using an oxygen mask, Cook remained more active than most healthy people. Young Aboriginal and non-Aboriginal researchers would often drop in to visit him. And he stayed closely in touch by phone with activists from across the country.

Kevin Cook was an Aboriginal activist, a worker, a trade unionist, a leftie and an internationalist. All those things explain why he was admired, but not the mourning following his death. He thought that everyone had a value, and he worked on that principle. In an era when many of our leaders have egos that need their own postcode, Cook had no need for an ego to be stroked and did not have a grain of pretentiousness. He liked to assist, help, promote and encourage other people and never to take the limelight.

It was why people who might not work with each other elsewhere, would find they could come together within his framework and why, as Terry O’Shane joked, before people met him, “They thought he was 10 foot high and bullet-proof!” Cook was not someone who came to believe that everyone was equal. It’d just never occurred to him that it would be any other way.

Kevin Cook is survived by his brother Ronnie, sister Joy, cousin Kathy and by his children Suzie and Mereki and first wife, Margaret. In the early 1980s he entered a life-long partnership with Judy Chester, sharing her life and her children: Peter, Jody and Janette, and five grandchildren.